What Is Bi Bo

Bi Bo commonly known as Fructus Piperis Longi or Long Pepper Fruit is the dried and almost ripe or ripe fruit spike of Piper longum L., which is an evergreen and perennial climbing vine or shrub belonging to the family Piperaceae. It is a relatively practical Chinese herbal medicine, which first appeared in <Xin Xiu Ben Cao> in 659 AD.

There are more than 2,400 species of Piper, which are distributed in tropical regions of the world. Most of these species grow in tropical rainforests and a few in subtropical areas. Among them, Piper nigrum, P. auritum, P. longum, and P. cubeba are relatively popular species. The fruits of some of these species can be made into edible spices.

Piper longum L. also called Indian Long Pepper or thippali is an aromatic and flowering plant. It is a close relative of P. nigrum, which gives black, green, and white pepper and has a similar but generally hotter flavor. They are mainly distributed in India, China, Eastern Himalayas, Laos, Myanmar, Thailand, Vietnam, Nepal, the Philippines, and Indonesia. Its fruits and roots are often used in Ayurvedic medicine and traditional Chinese medicine. 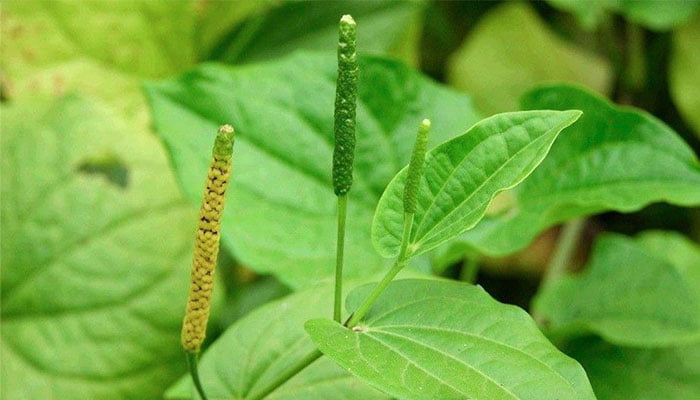 When the fruit spikes of P. longum turn from green to black, people gather their fruit spikes, remove impurities, dry them in the sun, and make them into Chinese herbal medicine.

Generally, the plump Bi Bo with a strong fragrance is preferred.

According to the Chinese Pharmacopoeia, the medicinal property of Bi Bo is relatively hot, with a pungent taste. It has a therapeutic effect on pathological changes in the stomach and large intestine meridians.

There are more than 50 kinds of traditional Chinese medicine prescriptions containing it, such as Kuanxiong Aerosol, Su He Xiang Wan, and Liu Wei Mu Xiang San.