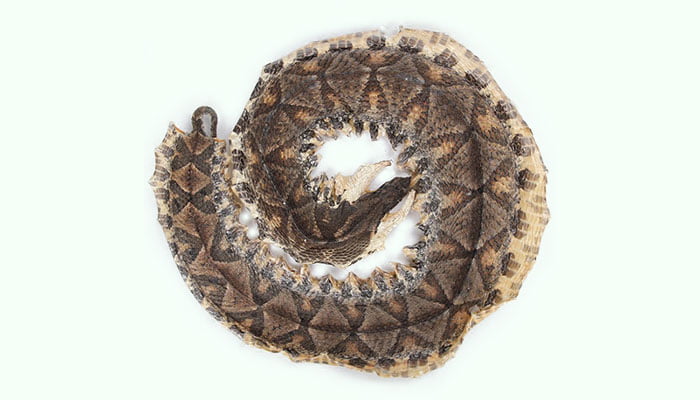 What Is Chinese Moccasin

Chinese Moccasin is commonly known as Qi She, Bai Hua She, Sharp-Nosed pit viper, or Deinagkistrodon acutus, which is an oviparous pit viper belonging to the family Viperidae. It is rare animal medicine, which first appeared in <Lei Gong Pao Zhi Lun> (Master Lei’s Discourse on Processing of Chinese Materia Medica) in the Northern and Southern Dynasties. (420 AD–589 AD)

In general, This kind of snake is also known as Hundred Pacer (100 step snake) in China. Because people think that its venom is very powerful, the person bitten by it will die within 100 steps. In some areas, it has even been called the fifty pacer or, in extreme examples, the five-step snake.

This kind of snake is extremely aggressive. According to reports, it bites and causes death every year. With the production of antivenom, such deaths are also decreasing. If you meet it in the wild, you should avoid it at a distance.

Chinese Moccasin live in mountainous or hilly areas 100-1400 meters above sea level. Most of them live near valleys and streams at an altitude of 300-800 meters and occasionally enter mountain village houses.

In the hot summer, they will inhabit the shady places under the rocks, grasses, and tree roots by the valleys and streams. In winter, they live through the winter in the rock cracks and earth caves on the sunny hillside.

Chinese Moccasin can be found in Southeastern China in the provinces of Anhui, Zhejiang, Fujian, Hunan, Hubei, Jiangxi, Guangxi, Guangdong, Guizhou, extreme southeastern Sichuan, and possibly Yunnan. Among them, they are the most distributed in the mountains of Wuyishan and southern Anhui. This species also occurs in northern Vietnam and Laos. Due to environmental impacts, the number of wild Chinese Moccasin has been relatively reduced. It has now been bred in captivity.

In the summer and fall of each year, the breeders catch Deinagkistrodon acutus, plan their abdomens, remove their internal organs, wash them with water, spread their abdomen with bamboo, dry them in the sun, remove snakeheads and snake scales, cut them into segments, use them directly, or fry them with wine, or rice wine to penetrate them, making them into Chinese herbal medicines.

According to <Compendium of Materia Medica>, the medicinal property of Chinese Moccasin is relatively warm, with toxicity and a sweet and salty taste. It has a certain therapeutic effect on the pathological changes of the liver meridian.

At present, most of the researches on the Chinese Moccasin has focused on the immune regulation, anti-tumor, and cardiovascular protection of its snake venom. Only a small proportion of Chinese patent medicines contain it, such as Ren Shen Zai Zao Wan, Ding Ming San, Zhui Feng Wan, and Qu Feng Gao.

There are reports of allergies in a small percentage of people taking medicines containing Chinese Moccasin.