What Is Sang Ji Sheng

Sang Ji Sheng commonly known as Herba Taxilli is the twig with leaves of Taxillus chinensis, which is a semi-parasitic undershrub belonging to the family Loranthaceae. It is a relatively practical and common Chinese herbal medicine, which first appeared in <Shennong Ben Cao Jing> in the late Western Han Dynasty (about 100 BC).

There are about 35 species in this genus, and they are mainly distributed in southeastern and southern Asia. Among them, only a small number of species are distributed in eastern Africa. Some of these species have high medicinal value and are widely used in clinical applications.

Taxillus chinensis often grows in plains or low-mountain evergreen broad-leaved forests at an altitude of 20-400m. They are often parasitic on a variety of plants such as mulberry, peach, plum, longan, lychee, poplar, camellia oleifera, vernicia fordii, rubber tree, banian, bombax ceiba, pinus massoniana, or water pine. They are distributed in China, Thailand, Vietnam, Laos, the Philippines, Cambodia, and Malaysia. 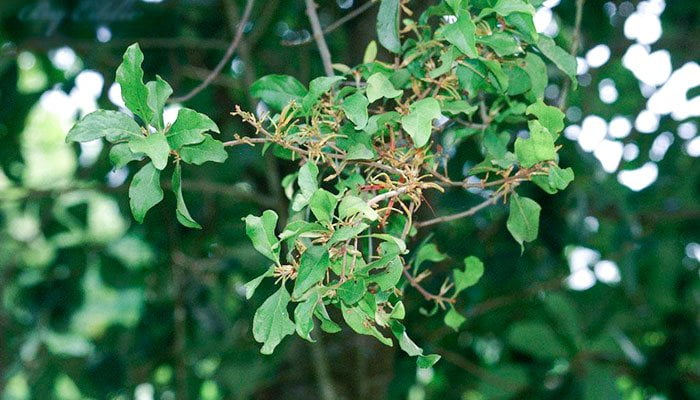 From winter to the following spring, people gather the twigs of Taxillus chinensis, remove the thick stems and impurities, dry them, or steam them, then dry them, cut them into thick slices, and make them into herbal medicines.

Generally, reddish-brown or grayish-brown, and tender Sang Ji Sheng with many leaves is preferred.

According to <Shennong Ben Cao Jing>, the medicinal property of Sang Ji Sheng is relatively neutral, with a bitter and sweet taste. It has a certain therapeutic effect on the pathological changes of the liver and kidney meridians.

Its high dose of aqueous decoction has toxic effects on rat embryonic development. It may have certain toxic chemical components, which will affect the normal development of the fetus. Pregnant women should avoid taking it in high doses.

The Sang Ji Sheng whose hosts are poisonous wood species (such as oleander) are significantly toxic.

Animal experiments have shown that it may cause clonic convulsions, vomiting, diarrhea, and even death in experimental animals.