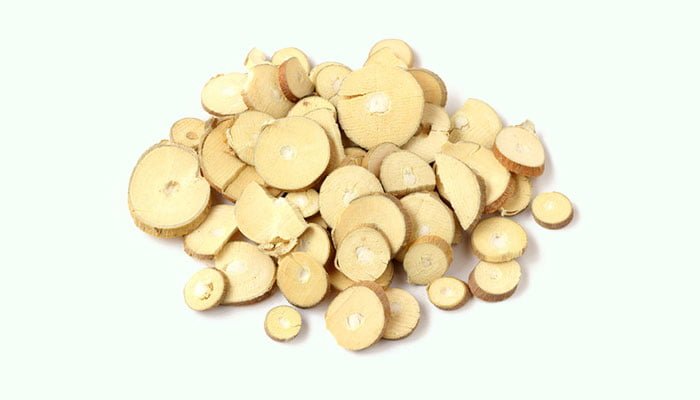 What Is Sang Zhi

Sang Zhi commonly known as Ramulus Mori or Mulberry Twig is the twig of Morus alba L., which is a deciduous tree belonging to the family Moraceae. It is a commonly used Chinese herbal medicine, which first appeared in <Tu Jing Ben Cao> (Illustrated Classic of Materia Medica) in 1,061 AD.

Morus alba L. likes light and a warm and humid climate. It is native to central and northern China and is now distributed in China, North Korea, Japan, Mongolia, India, Vietnam, Russia, Central Asia, and Europe.

They have high medicinal value. Their leaves, twigs, root bark, and fruits can be made into medicine.

In late spring and early summer, people gather the twigs of Morus alba L., remove the leaves from the branches, dry them in the sun, cut them into thick slices, and make them into Chinese herbal medicines.

According to <Ben Cao Tu Jing>, the medicinal property of Sang Zhi is relatively neutral, with a slightly bitter taste. It has a therapeutic effect on the pathological changes of the liver meridian.

There are about 50 kinds of Chinese medicine prescriptions containing it, such as Tian Ma Zhui Feng Gao, Sang Zhi Gao, and Du Zhong Zhuang Gu Wan.