What Is Gao Liang Jiang

Gao Liang Jiang commonly known as Rhizoma Alpiniae Officinarum is the rhizome of Alpinia officinarum Hance, which is a perennial herb belonging to the family Zingiberaceae. It is a relatively practical and common Chinese herbal medicine, which first appeared in <Mingyi Bie Lu> around 420-589 AD.

There are about 246 species of Alpinia, which are mainly distributed in tropical and subtropical areas of Asia, Australia, and America. Some of these species are used medicinally, such as Alpinia officinarum Hance, A. oxypnylla Miq., and A. katsumadai Hayata.

Alpinia officinarum Hance is also known as lesser galangal. This plant likes high temperatures and is not hardy. They grow well in well-drained areas. They often grow in hills, hillsides, grass, forest edges, and sparse forests below 700 meters above sea level. They are mainly distributed in China, India, Vietnam, and Cambodia. 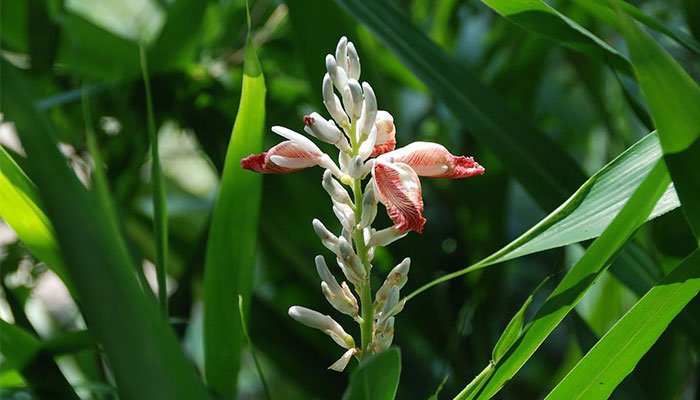 In late summer and early autumn, people gather the rhizomes of galangal, remove their fibrous roots and scales, wash them with water, moisten them, cut them into thin slices, dry them in the sun, and make them into Chinese herbal medicines.

Generally, the red-brown Gao Liang Jiang with a strong fragrance and a spicy taste is preferred.

According to the Chinese Pharmacopoeia, the medicinal property of Gao Liang Jiang is relatively hot, with a pungent taste. It has a certain therapeutic effect on the pathological changes of the spleen and stomach meridians.

There are more than 150 kinds of traditional Chinese medicine prescriptions containing it, such as Er Jiang Wan, Liang Fu Wan, and Jiu Qi Xin Tong Wan.

Animal studies have shown that Gao Liang Jiang has some toxicity.