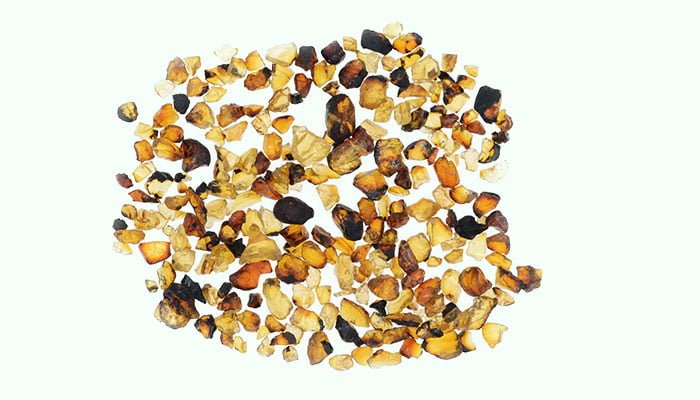 What Is Hu Po

Hu Po commonly known as Succinum or Amber is the fossilized resin of pine trees, which is an evergreen tree belonging to the family Pinaceae. It is a precious mineral medicine, which first appeared in <Mingyi Bie Lu> around 420-589 AD.

There are about 118 species of Pinus, which are mainly distributed in the northern hemisphere. They are common trees for afforestation and greening. They are widely used in many fields such as construction, agriculture, chemical industry, medicine, and so on. Among them, the seeds of some pine trees are edible.

The formation of amber is a masterpiece of nature. The resin fell and was buried in the ground. After tens of thousands of years of high temperature and high pressure in the rock formations, they were petrified to form amber.

At present, the age of the oldest amber ore discovered in the world is around 99 million years old. They have a high collection value, ornamental value, and medicinal value. In prehistoric times, amber was used as currency for transactions. Now they are widely used in jewelry and accessories manufacturing. They symbolize noble, classical, and implicit beauty.

They are mainly distributed in glutenite or coal deposits in the Cretaceous and Tertiary. They can be found in countries such as Russia, Poland, France, the United Kingdom, Myanmar, Italy, Japan, India, the United States, Dominican Republic, China, and Mexico.

Amber is not extremely common. When workers find them in the stratum or coal seam, they dig them out, remove the sediment, and store them. Generally, bubbles and ancient insects, animal or plant debris are often seen inside amber.

According to <Ben Cao Gang Mu Shi Yi>, the medicinal property of Hu Po is relatively neutral, with a sweet taste. It has a certain therapeutic effect on the pathological changes of the heart, liver, and bladder meridians.

There are about 50 kinds of Chinese medicine prescriptions containing it, such as Hu Po An Shen Wan, Hu Po bao Long Wan, and Mayinglong Musk Hemorrhoids Ointment.

At present, there is no data showing that serious adverse reactions will occur when taking Hu Po according to the regulations.

Animal experiments have shown that excessive consumption of it can lead to reduced animal activity.