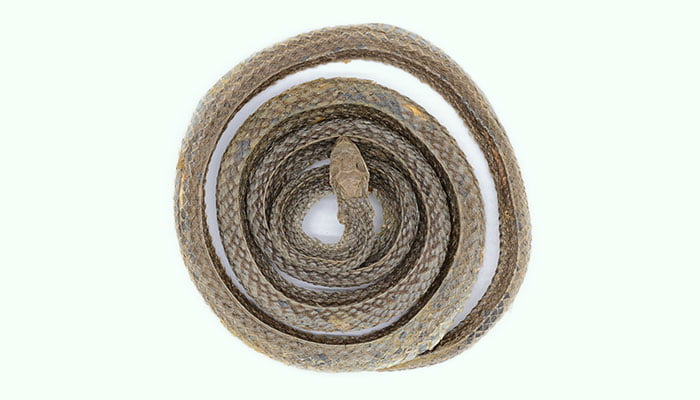 What Is Wu Shao She

Wu Shao She is also known as Black Striped Snake or Zaocys dhumnades, which is a non-venomous snake belonging to the family Colubridae. It is common animal medicine, which first appeared in <Lei Gong Pao Zhi Lun> (Master Lei’s Discourse on Processing of Chinese Materia Medica) in the Northern and Southern Dynasties420 AD–589 AD).

Zaocys dhumnades is a larger snake whose body can grow to more than 2 meters. It has a certain economic value. Its meat is edible and has high nutritional value. Its nutritional value is higher than that of chicken, duck, and beef. Its skin can be made into a Huqin membrane.

They are widely found in plains, hills, and low mountains. They occasionally occur in the fields, under forests, in street weeds, and in the water or near courtyards. They are agile and like to swim and hunt in the water.

Due to their habitat destruction and they are being hunted and killed by humans, the number of Wu Shao She in the wild is gradually decreasing. At present, some areas have begun to artificially breed them.

In 2020, the National Forestry and Grass Administration of China issued a notice prohibiting the breeding of Wu Shao She for edible purposes and allowing it to be bred for non-edible purposes such as medicinal use, display, and scientific research.

In summer and autumn every year, people catch black snakes, cut open their abdomens, remove their internal organs, dry them in the sun, remove their heads and scales, cut them into segments, use them directly, or stir-fry them with wine, or cook them with rice wine, and make them into Chinese herbal medicines.

Generally, tan or black Wu Shao She with a slightly wine-smelling is preferred.

According to <Compendium of Materia Medica>, the medicinal property of Wu Shao She is relatively neutral, with a sweet taste. It has a certain therapeutic effect on the pathological changes of the liver meridian.

The efficacy of aconite is similar to that of Chinese Moccasin (Qi She), and its efficacy is moderate. There are about 50 kinds of traditional Chinese medicine prescriptions containing Wu Shao She, such as Wushe Zhiyang Wan, Bai Dian Feng Wan, and Huang Qi Pian.

Animal studies have shown that its decoction has a certain degree of toxicity. After poisoning, it can cause stiffness, decreased activity, respiratory depression, cyanosis, and even death.

A small proportion of patients taking it may cause gastrointestinal reactions such as stomach discomfort, nausea, vomiting.

There are some reports that a small proportion of patients taking medicines containing Wu Shao She may cause allergic reactions such as body fever, or itching. Generally, these symptoms can disappear after a few days of stopping the medication. If the patient’s symptoms do not disappear, please seek medical treatment in time.