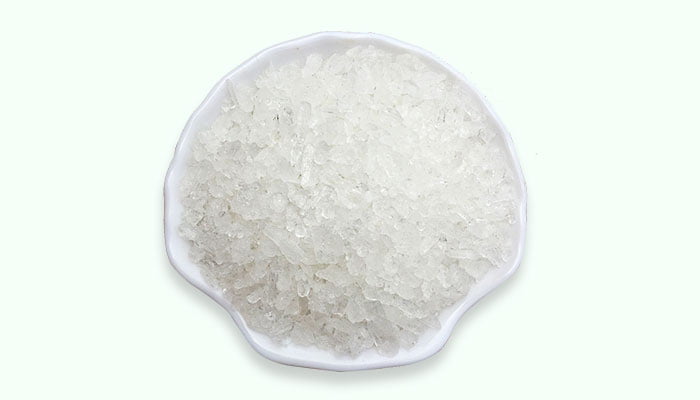 What Is Mang Xiao

Mang Xiao is also known as Natrii Sulfas, Glauber’s salt, or Mirabilite and is a hydrous sodium sulfate mineral. It is a natural laxative and belongs to mineral medicines, which first appeared in <Shennong Ben Cao Jing> in the late Western Han Dynasty (about 100 BC).

Two-thirds of the world’s production of Mang Xiao is from natural mirabilite. Its annual output is about 600 tons, which can be synthesized artificially.

Mang Xiao is unstable and quickly dehydrates in dry air, the prismatic crystals turning into a white powder, thenardite (Na2SO4). In turn, thenardite can also absorb water and convert to Mang Xiao.

Thenardite is an important basic chemical raw material, which is widely used in the fields of washing, bleaching, papermaking, glass, leather, synthetic fibers, inks, and rubber.

Mirabilite can be collected at any time of the year, but it is better in winter. People dissolve natural mirabilite in hot water, filter, and cool to obtain crystals. Then, boil it with the sliced white radishes, filter out their filtrates, and cool again to obtain crystals. In traditional Chinese medicine technology, it can be combined with watermelon to make Xi Gua Shuang (Watermelon Frost).

Mang Xiao mainly contains hydrous sodium sulfate, as well as a small number of inorganic salts such as sodium chloride, magnesium sulfate, and calcium sulfate. Generally, colorless and transparent Mang Xiao with a glassy gloss cross-section is the best.

According to <Yao Pin Hua Yi> (Genuine book Drugs of Justice), the medicinal property of Mang Xiao is relatively cold, with a salty and bitter taste. It has a certain therapeutic effect on the pathological changes of the stomach and large intestine meridians.

Although Mang Xiao is generally regarded as non-toxic, it should be handled with care.

Its powder can cause temporary asthma or eye irritation.

Overdose it may cause nausea, vomiting, abdominal pain, diarrhea, or prostration.