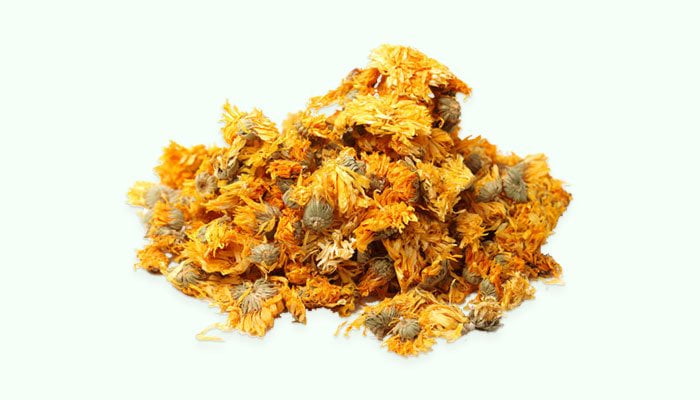 What Is Ju Hua

Ju Hua commonly known as Flos Chrysanthemi is the flower head of Chrysanthemum morifolium, which is a perennial herb belonging to the family Asteraceae. It is a relatively practical and common Chinese herbal medicine and dietary supplement, which first appeared in <Shennong Ben Cao Jing> in the late Western Han Dynasty (about 100 BC).

There are about 30 species of Chrysanthemums, which are mainly distributed in the subtropical and temperate regions of the Old World. Among them, most of the plants are ornamental plants, and only a few of them are used for medicine.

Chrysanthemums are short-day plants. It likes light and a warm and humid climate. They grow well in deep soil, rich in humus, fertile and well-drained sandy loam.

Chrysanthemum is one of the top ten famous flowers in China. It is also defined by the Chinese as the four gentlemen in the flower, and the other three are plum blossom, orchid, and bamboo. It is given the meaning of auspiciousness and longevity by the Chinese people.

From September to November, people gather the flower heads of Chrysanthemum morifolium remove impurities, dry them or steam them, and dry them in the sun, and make them into Chinese herbal medicines.

Generally, white or yellow Ju Hua with a strong aroma is preferred.

According to <Shennong Ben Cao Jing>, the medicinal property of Ju Hua is slightly cold, with a pungent, sweet, and bitter taste. It has a certain therapeutic effect on the pathological changes of the lung and liver meridians.

There are about 100 kinds of Chinese medicine prescriptions containing it, such as Sang Ju Yin, Huang Lian Shang Qing Pian, and Qi Ju Di Huang Wan.

Animal studies have shown that taking its decoction in large doses may cause loss of appetite, weight loss, diarrhea, and even death in animals.

Overdose may cause abdominal pain or diarrhea.

A small percentage of people taking it may cause allergic reactions such as rash or itching.