What Is Qin Pi

Qin Pi commonly known as Cortex Fraxini or Ash Bark is the bark of Fraxinus rhynchophylla, F. chinensis, F. szaboana, or F. stylosa, which is a deciduous tree belonging to the family Oleaceae. It first appeared in <Shennong Ben Cao Jing> in the late Western Han Dynasty (about 100 BC).

There are about 70 species of this genus, which are mainly distributed in temperate regions of the northern hemisphere. They are an important source of biological wax. Their trunk can be made into furniture and agricultural tools.

Fraxinus rhynchophylla often grows on river banks, hillsides, or roadsides below 1,500 meters above sea level. It is distributed in Russia, Korea, and China and has not yet been artificially introduced and cultivated.

F. chinensis is also known as Chinese ash and often grows in mountains or woods at an altitude of 800-1,600 meters.

F. szaboana often grows in mountains at an altitude of 1,000 meters. It is distributed in the provinces of China’s Yangtze River Basin and Yellow River Basin and has not yet been artificially introduced and cultivated.

F. stylosa is a unique plant in China, which is distributed in Gansu, Sichuan, Henan, and Shaanxi of China. It often grows in hillsides or woods at an altitude of 1,300-3,200 meters. 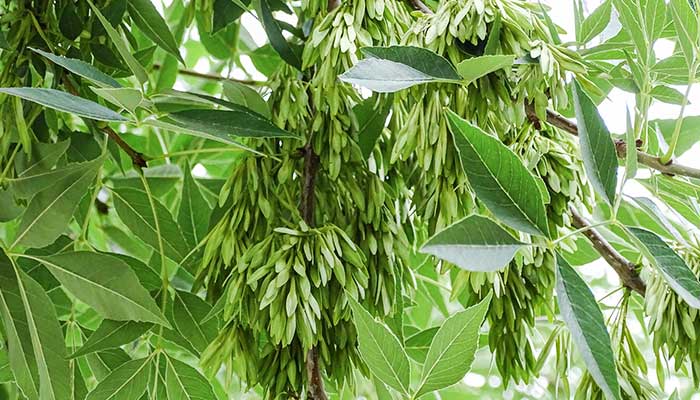 In spring and autumn each year, people peel the bark of Fraxinus rhynchophylla, F. chinensis, F. szaboana, or F. stylosa, dry them in the sun, cut them into pieces, and make them into Chinese herbal medicines.

Generally, the grey-brown and strong Qin Pi with a fibrous cross-section is preferred.

According to <Compendium of Materia Medica>, the medicinal property of Qin Pi is relatively cold, with a bitter and astringent taste. It has a certain therapeutic effect on the pathological changes of the liver, gallbladder, and large intestine meridians.

At present, there is no literature report that it has toxic effects, and no data have been found to show that taking Qin Pi at the prescribed dose will cause serious adverse reactions.